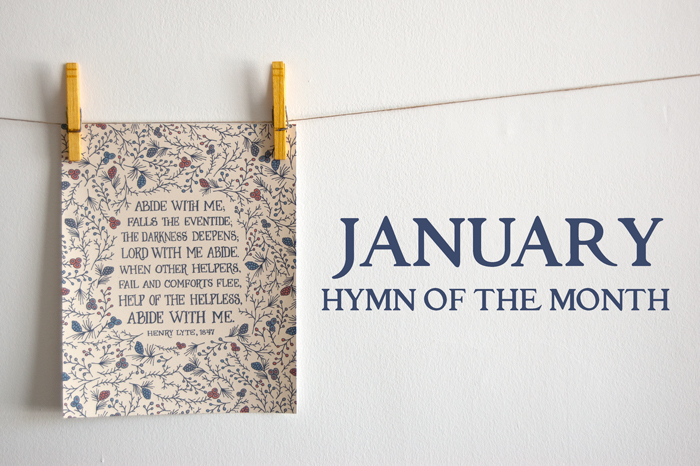 A few weeks ago a customer told me that she was going to teach her children the hymn from each month of the hymn calendar. I thought that was just simply amazing! Hymns are slowly fading from our Christian culture and I simply don’t want that to happen. Their words are rich and moving. Frankly I feel that most of contemporary Christian music simply lacks depth and substance. When I made the hymn calendar, I had no idea what kind of response I would have. I was hoping that I’d sell the same amount of calendars that I have in previous years. But if you’ve been following me on social media, you’ll know we were constantly SOLD OUT and having to reorder! We’re even out of stock right now and waiting for another shipment from our printer (hoping they come in on Friday). Of course I’m so thankful for sales, but I am most thankful that there are still so many people that still have a love for hymns.

Throughout this year, I want to share each month a brief history of the hymn and the hymn writer from the hymn calendar.

I simply had to use “Abide With Me” for January. It felt so fitting for such a bleak and cold month. Most of this “research” has come from the scholarly website Wikipedia. 😉

Henry Francis Lyte was born June 1, 1973, in Ednam, Scotland. He was an Anglican divine (that’s their term for clergy) serving first in Sway, then Brixham, England. . Fun fact: he married Scottish-Irish Anne Maxwell who was seven years older than him. I’m seven years older than Dave! They had two daughters and three sons. His youngest child Farnham Maxwell-Lyte was a chemist and a pioneer in photographic processing.

“Lyte was a tall and “unusually handsome” man, “slightly eccentric but of great personal charm, a man noted for his wit and human understanding, a born poet and an able scholar.” He was an expert flute player and according to his great-grandson always had his flute with him.[16] Lyte spoke Latin, Greek, and French; enjoyed discussing literature; and was knowledgeable about wild flowers.” – Wikipedia article

He wrote the poem “Abide with me” as he was dying of tuberculosis. He finished it the Sunday, hours before his farewell sermon where he had been serving for years. The next day, he left for Ita­ly to re­gain his health. He didn’t make it, though—he died in Nice, France, three weeks af­ter writ­ing these words. He died November 20, 1847. Here is an ex­cerpt from his fare­well ser­mon:

“O breth­ren, I stand here among you to­day, as alive from the dead, if I may hope to im­press it upon you, and in­duce you to pre­pare for that sol­emn hour which must come to all, by a time­ly ac­quaint­ance with the death of Christ.”

When Hymns Ancient and Modern was published in 1861, the editor, William H. Monk—whose three-year-old daughter had just died—composed his own tune, “Eventide,” for Lyte’s poem. For over a century, the bells of his church at All Saints in Low­er Brix­ham, De­von­shire, have rung out “Abide with Me” daily. The hymn was sung at the wed­ding of King George VI, at the wed­ding of his daugh­ter, the fu­ture Queen Eliz­a­beth II, and at the funeral of Nobel peace prize winner Mother Teresa of Calcutta in 1997.

And if you haven’t heard Indelible Grace’s version of Abide with Me, then you need to do it right now. And you are gonna thank me for it. It’s simply divine. I usually tear up every time I hear it. You can listen FREE on their bandcamp site. Here is the direct link to the song sung by Matthew Perryman Jones.

And I did make a print of the hymn that you can purchase here. Or you can always buy a hymn calendar! You’re not too late! It’s just January 14th and we are going to get more in stock!

3 thoughts on “Abide with Me – January Hymn of the Month”